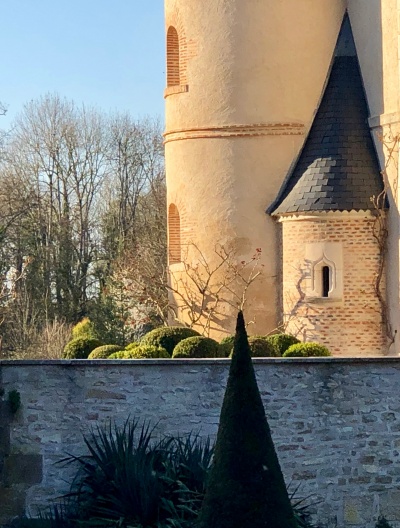 The first mention of the Seigneury of Pesselières, which was a servant fief in the County of Sancerre, was made in 1170, when it was in the de Livron family’s possession. In 1301, Etienne d’Arquian held the fortified manor of Pesselières. In 1381, the stronghold was in the hands of the de La Porte family, who would remain Lords of Pesselières until 1639.

Being of strategic importance to the defence of the County of Sancerre, the stronghold of Pesselières never stopped evolving, adapting itself to new war tactics as the centuries went by. From the 14th century to the middle of the 17th century, accounts and registers described a stronghold enclosed within walls and defended by a deep and wide moat that was spanned by a drawbridge. A gatehouse flanked by two towers protected the entrance. To the south - now the farmyard and castle farm – was the moated courtyard within walls reinforced by towers. It housed farming equipment: a barn, stables, a press, dovecote, and gardens. The ditches protecting it, the stronghold’s first line of defence, are still visible today.

The stronghold of Pesselières therefore still corresponds to the plan of the castle-courtyard that was implemented in the 13th century.

The living quarters, comprising three large rooms on the ground floor, were installed at the far end of the courtyard – the central wing in front of you in the honour courtyard today. One imposing cylindrical tower flanked the rear facade in its centre, to the north. The south-west corner of the castle was protected by a square pavilion. This was reinforced to the west – facade looking onto the park – by a spurred tower. These elements, with their very thick walls and escarped foundations, are still visible today, belonging to an edifice that was restored and reinforced at the end of the 14th century and in the 15th century.

After having been besieged and attacked during the French Wars of Religion, the stronghold was partially reconstructed at the end of the 16th century.

The decoration on the façade looking onto the court of honour, and the introduction of a door adorned with finely sculpted bosses, date from this time. When peace was restored in the 17th century, the castle gradually abandoned its defensive role and became a pleasure residence in the heart of a vast territory that was the Barony of Pesselières.

In the 18th century, the entrance gatehouse and drawbridge were destroyed, windows were put in the north and east facades, allowing the castle a view of its gardens, and interior adjustments made it more comfortable.

In the 19th century, the remains of the defensive apparatus, including the ditches, outer walls and pavilions at the corners of the court of honour, were removed. The end of the south-west wing was demolished to allow a better view of the park. The large tower was heightened, and the 17th century south-east wing was adorned in the neo-gothic style according to the taste of the time. These substantial modifications were accompanied by the establishment of new gardens in keeping with the romantic style that was conferred to the park as early as the 18th century.

As a seat of a barony vassal of the Counts of Sancerre, the Castle of Pesselières was at the heart of a region that was very keenly contested between the French and English during the English Wars. The right bank of the river Loire belonged to the English and their allies, who also held La Charité sur Loire, while the left bank and Berry were French. During the Wars of Religion, as Pesselières defended the predominantly protestant town of Sancerre, it was once more in the centre of a bitterly disputed territory, this time between Protestants and Catholics.

The traces of this eventful history can still be seen on the facades and architectural details of the castle.

A romantic Parc in Sancerrois

The Park is romantic in style and its design dates from the 18th and 19th centuries. However, two important elements bear witness to the creation of a formal park “à la française” at the end of the 17th century under the reign of Louis XIV: the tercentennial box hedge and the river, which once took the form of a canal with stone banks.

This historic estate has been the focus of all our energy for the past fifteen years. The presence of springs as well as the wealth of flora and fauna very quickly encouraged us to adopt as natural an approach as possible. We therefore do not use any herbicides, fungicides or pesticides, and we apply the rules of organic gardening. The RCW, (wood chippings) and the compost we use are made on site.

We made the choice not to have traditional lawns at Pesselières so as to avoid a monoculture that is demanding of fertiliser and selective weed killer. The meadows, like the lawns surrounding the castle, are therefore constituted of a collection of grasses and a mix of spontaneous vegetation, the aesthetic quality of which is based solely on regular mowing.

Since 2008, in collaboration with the landscape gardener Benoit de Choulot, a great many trees of either botanical or aesthetic interest have been planted. They all have labels identifying them, as do the more beautiful 100 year old specimens which we call “the venerable trees”. A labyrinth composed of over 1000 hornbeam plants was created in front of the castle’s facade at the end of 2009. Over the last two years, the box hedge has been expanded by adding over 150 plants.

Above the castle, the Walled Garden ( orchard, vegetable and flower garden) was designed by Patrice Taravella of the “Le Prieuré d’Orsan”. Pascale Marq, garden designer, has been in charge of the layout and planting for 3 years in accordance with the organic principles.

A topiary walk in the woodland was recreated last year.

During your visit, you are welcome to ask the gardeners questions about their work.

We invite you to take your time, stroll, tread the dense grass in the meadows, observe nature and, we hope, feel the Genius Loci, the spirit of the place.